Our friend, and resident art expert, Lindsay returns this week with another insightful I Heart Art!
Witold Wojtkiewicz 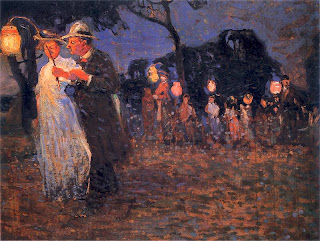 The turn of the century was a hard time for the Polish people; it was rife with political, social, and economic instability. The Russian revolution of 1905 had sharp repercussions on Poland, weakening the cruel Polish Kingdom, strengthening the nationalistic movement and acting as the epilogue to the nineteenth century. Witold Wojtkiewicz portrayed the vigor and frailty of human existence by pairing a sense of the grotesque with a satirical edge. Often incorporating marionettes and carnivalesque figures, his works seem to straddle the cusp between the ordinary life and an imagined Other. While his earlier works, such as Rozpustnica, contain distorted figures that are almost caricatures of human emotions, his later works exhibit a mature serenity and awareness. In Garden Party, the solemn twilight procession of near-faceless figures suggests a ritual voyage from day-lit reality to the dreamworld of Wojtkiewicz's mind. Wojtkiewicz melds his fascination with childhood, the sadness of human existence and the solemnity of ceremony, three subjects that he continually explores, in order to probe the human experience. He informatively contrasts illusion with truth, appearance with inner meaning, late nineteenth century sensibilities with grotesque figures from Polish fairytales. 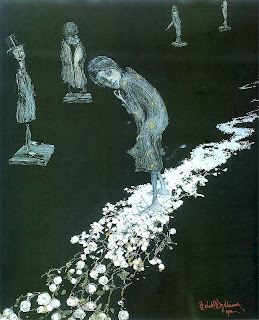 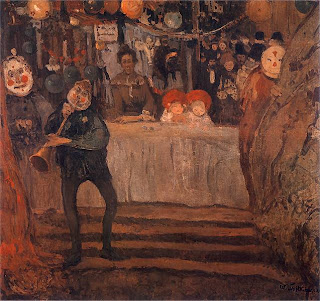 I love these. I'd never heard of Wojtkiewicz and now will happily go Google him. Thanks!