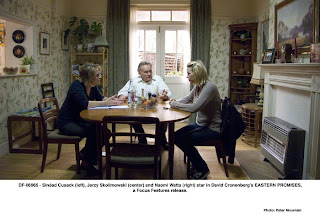 Eastern Promises may be the worst movie I've seen in a long time. The film is a predictable crime thriller with poor attempts at plot twists & holes in it like you wouldn't believe. The character development was terribly lacking, especially coming from David Cronenberg who received a lot of acclaim for A History of Violence. The only thing I am thinking about after watching this movie is getting a refund of $3.99 from my cable company & wondering how I can get 2 hours of my life back. Why oh why did this movie receive good reviews from the critics & even award nominations? Does the presence of Naomi Watts & Viggo Mortensen alone equal an Academy Award?

Though Eastern Promise will not be confused with Raising Caine, your critique seems overly harsh and unsupported.