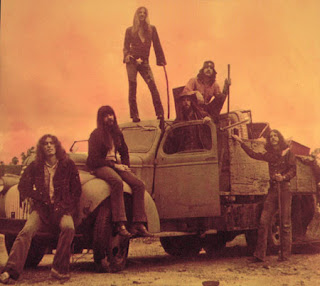 I'm off to the beautiful state of Arkansas later this week to visit mi abuelita.
In thinking about my place of birth, The Natural State, I recently discovered this photo of 60's rock 'n' roll band, Black Oak Arkansas & had to share it. The band was originally called Knowbody Else, until they moved to L.A. and changed their name to Black Oak Arkansas, after their hometown. Described as "pure southern-fried rock", the lead singer Jim 'Dandy' (not Jim Bob?) Mangrum's voice was known for its raw sexual energy.
I'm having visions of spandex-infused performances by hillbilly hippies. How about you?