a win for the wolves? i don't think so. 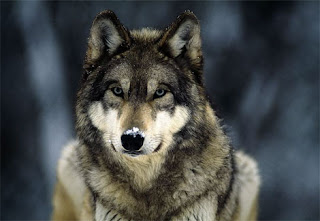 Isn't he breathtaking?
I have an on-going love affair with all animals (and this love runs deep), but there's something extra special about the wolf. So magnificent, distinguished, and sophisticated. Yet, there is a sadness in their eyes, which I attribute to the species' long and harrowing struggle for survival.

In my update from The Daily Green today, I read about a new obstacle that is facing the gray wolf - Gray Wolves No Longer Endangered*
*At Least Not According to the Law by Dan Shapley.
Looking into the matter further, I found this press release on Defenders of Wildlife.

Here's my synopsis on the issue...

Years ago, the hideously despicable & disgusting practice of hunting (can you tell that I hate it?) nearly eradicated the gray wolf population in the U.S. Eventually, the government stepped in with protection measures in an attempt to avoid the complete extinction of the species. Tireless & steadfast conservation efforts that followed can be credited with the presence of the wolf in our world today. Protection under the Endangered Species Act has given the canis lupus a chance at survival. The gray wolf population in the U.S. is currently 1,500 with at least 100 breeding pairs living in Montana, Idaho, and Wyoming.

Due to the success of population growth and sustainability, the northern Rockies gray wolf was removed from the national list of endangered species (signed yesterday by a-hole Pres. Bush). Although this may sound like a success story, some conservation groups are calling it premature & a cause for great concern. In fact, the Sierra Club has plans to sue the U.S. Fish & Wildlife Service and other conservation groups to obtain a reversal on the decision. They fear that the lack of genetic diversity in the wild wolf population is not strong enough to survive a new disease outbreak or other threats without the protection of the ESA.

Also, according to Defenders of Wildlife, this leaves the gray wolf vulnerable to the state management plans developed by Wyoming, Idaho, and Montana, which calls for drastic reductions in wolf populations in the region. This could allow eradication of up to 70% of the population, which would again polarize the issue of wolf killing with the residents of these states & debar the possibility of the northern Rockies wolves to interconnect with larger populations in Canada or the possibility of new populations in other states.

The success of the wolf comeback is a great one thus far, in that they have grown in population and are planting their roots of continued presence on the earth. But, the removal of the government protections that allowed the wolves to flourish in the first place is a cause for great concern. Will it cause the species to falter in their continued struggle for survival?

Donate to the cause of the wolf here:
Defenders of Wildlife
Sierra Club